HIMALAYA RESOURCES, together with Wilde Ganzen, is going to support a new project this year from our local partner organization UJJS with a slightly different focus than water. It is called ‘Samoon’ (meaning gift) and is about traditional seeds, good prices for small farmers and healthy food. 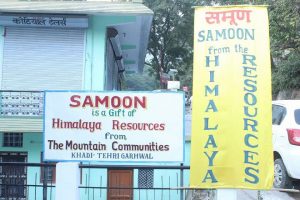 In 2015 HIMALAYA RESOURCES supported the establishment of a seed bank in a shop in the market of Khadi, near the center of UJJS. In this shop, traditional seeds and crops are collected, exchanged and sold. You should think of seeds for rice, wheat and millet, but also beans, legumes, specific potatoes, chillies and ginger root.
Traditional seeds have been adapted to the local environment. In contrast to the commercial seeds that are now often used, they require little water and no artificial fertilizer or pesticides. The variation and nutritional values ​​are great. An additional major advantage is that the use and reuse of traditional seeds makes farmers (financially) independent of large (multinational) seed companies. Based on fair trade principles, the farmers within the Samoon network get a good price for their organic products and hard work. The money does not disappear in the pockets of intermediaries.

This initiative is now being expanded. The number of women farmers who are members of the cooperative will grow. Training will be given on how to work with the traditional seeds. In these trainings the expertise of old farmers / farmers is combined with that of the agricultural university in the region. In addition, it is important to stimulate the demand for traditional products and that will be done by building a food center / restaurant on the shop. Here, local women prepare traditional dishes so that people can (again) become acquainted with it. Also tourists who travel along this route from various cities in this way come into contact with organic and healthy food and can buy the basic ingredients in the store. Finally, investments are made in a grain mill and oil press so that flour and oils can also be processed and sold.

The cooperative was set up by UJJS, but a fully independent cooperative is the ultimate goal.

HIMALAYA RESOURCES and Wilde Ganzen both committed to contributing 5000 euros to this beautiful project of UJJS. Do you also participate?