HIMALAYA RESOURCES wants to strive for a world where the solidarity between peoples overcomes boundaries of countries and culture differences. We wish to have in many aspects an enriching acquaintance between the inhabitants of the ‘Low Lands’ (Netherlands) and the ‘High Lands’ (Himalaya).

HIMALAYA RESOURCES choses for the most direct form of support: money from the Netherlands comes directly to the villages in the Himalaya without any overhead costs. A huge difference can be made in these villages with less money according to the western standard of living. 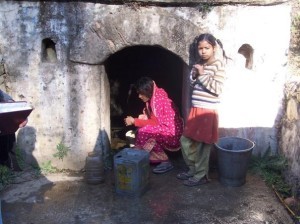 For 375 euros a village can have clean drinking water for years. And if you make it 895 euros you will be helping effectively in harvesting rainwater so that inhabitants of the village can have enough water to irrigate their lands throughout the year. The contact between us and the people in the Indian state of Uttarakhand who are actively involved in such projects goes back to 1995. They are trustworthy partners who have a very strong bond with the area and have dedicated their whole lives to improving the natural (living) environment of the Himalaya.

The status of the projects that are supported with the help of donated money from the Netherlands is reported on a regular basis.