Visit to project areas in India

At the end of January, board member Annette went to see the results of the water project of our local partner HIMCON in Kimsar. In 2016, the fundraising of HIMALAYA RESOURCES was focused on this and Wilde Ganzen helped by doing 50% on top of the amount we received from our donors. 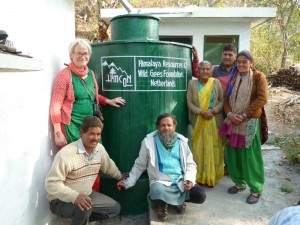 It was a great experience to be in Kimsar! The 10 rainwater collection tanks have made 10 families very happy. It saves them daily kilometers of walking to get to water. Especially with the older people a huge burden has fallen off their shoulders. Annette saw the one beautifully green painted water tank, after another, on which ‘thanks to HIMALAYA RESOURCES and Wilde Ganzen’ had been painted. 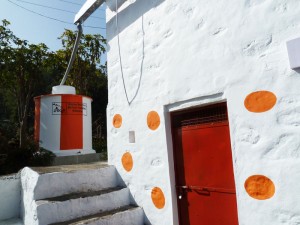 One tank in particular typified very well for Annette how the mood had changed in the area, since she had been here with Jeanet in December 2014: a white tank with orange stripes. And the entire house was painted in style.

The new tanks, ponds that collect rainwater and planted deciduous and fruit trees have given an enormous boost to the region. This is reinforced by the recent decision of another (Indian) foundation to also invest in the Kimsar area. HIMCON is working with this new foundation on revenue-generating activities such as growing mushrooms and various herbs. There is already a sales market. For now Kimsar is doing enough and we have decided to support another local partner, UJJS, in 2017.

UJJS focuses on the Henval Valley. On the map it is not far from Kimsar, but you will soon be in a jeep for about four or five hours to get there via winding mountain roads. There are also problems with the quality and quantity of water in the Henval valley. UJJS has a very ambitious plan for 2017. It wants to make thousands of school children in the valley aware of the water problem and involve them in practical solutions. In schools, water clubs are set up and children examine in their own villages, among other things, how things have been done with the sources.
All this information is studied by UJJS and on the basis of the data it will be decided where a new rainwater tank will be built first or an old one will be restored. Here too, ponds will be built to absorb rainwater and trees will be planted. The skepticism that there was at first with HIMALAYA RESOURCES or UJJS could reach so many children, was completely removed during Annette’s visit. 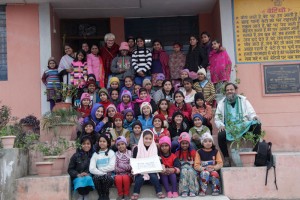 Together with Ranjan, who is in charge of UJJS, she visited the Kasturba Gandhi Residential Girls School Hostel, where over a hundred girls live and study. There is already a lively water club there and the students are very involved. Along the way Annette and Ranjan met all kinds of groups of school-age children who enthusiastically greeted them and shouted with great pride: ‘We are members of the water club’. 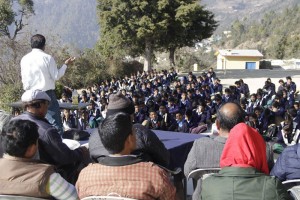 Ranjan visits one school after another and punches one water club after another from the ground. We think it is a great project! Especially because the involvement of young people is so important for the future (sustainable) development of this region. Before Annette started her return trip to the Netherlands, she made the project proposal with UJJS, which is now for approval by Wilde Ganzen. We hope for a positive reaction on their part and a lot of enthusiasm among our donors.

‘We are a member of the water club’